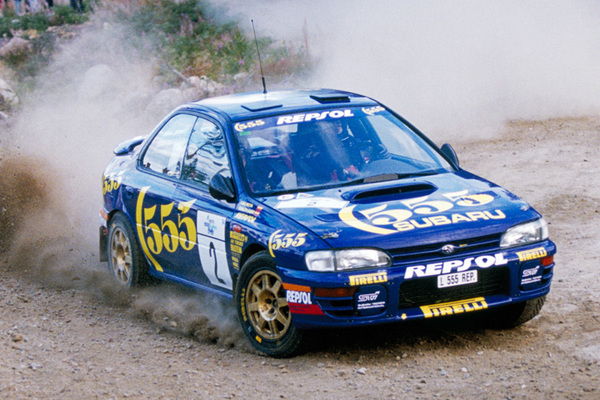 Chapter 1 we have adopted the flat 4-cylinder type from the days of Subaru 1000, but we have reported that its superiority is utilized in car making and also in terms of safety. I also looked at the advantages and benefits of the engine structure.

■The secret of boxer soundThe EJ engine for the first generation Legacy was planned as a flat 4-cylinder engine that covers displacements from 1.5L to 2.5L. The goal was to achieve a world-leading high output with 2.0L.

Since a large-diameter valve is used for straight intake, the valve holding angle is as wide as 52 degrees, and since a convex piston is used, it becomes a deformed combustion chamber and is not a uniform shape, so cooling loss is large.The valve drive is DOHC and the rocker arm type of the inner fulcrum is used to maximize the valve lift. As a result, both the naturally aspirated and turbo have achieved the highest output in the 2.0L class.

Finally, in order to adapt to high power, the crankshaft finally adopts a 5-bearing type to support high speed and high power. Therefore, the crank web has a very thin shape. The metal journal is mirror-finished to withstand high loads.

var microadCompass = microadCompass || {};microadCompass.queue = microadCompass.queue || [];microadCompass.queue.push({"spot": "2855f6f1517a0e35089113339090f10c"});googletag.cmd.push(function() {var slot = googletag.defineSlot('/62532913/p_autoprove_300x250_kiji2ndright_20391', [300, 250], 'div-gpt-ad-1540274856377-0').addService(googletag.pubads());googletag.enableServices();flucttag.showDfpAd(slot);});The SOHC EJ type cylinder has an open deck structure with the cylinder top open, but the DOHC EJ20 type has a high-strength, high-rigidity closed deck (the cylinder top is closed except for the waterway), although productivity is poor. For example, it has been adopted to make it suitable for high-power engines. Furthermore, the left and right each 2cylinders each employ a cross flow cooling system. The normal four cylinders are of the vertical flow type, and the cross flow is excellent for uniform cooling between the cylinders.

The intake manifold is of equal length, but the exhaust manifold is an unequal length manifold that collects every two cylinders on one side.For this reason, it produces a unique exhaust sound that is similar to the rumble sound of a V8 engine at low speeds, which is a major feature of the early model EJ20 engine.